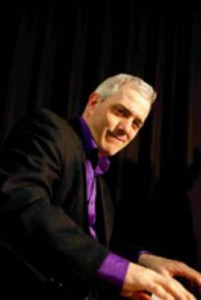 Based in Totnes, Devon, I share my musical knowledge through teaching and hosting jazz and improvisation workshops.

As a performer I lead The Blow-Up, translating the sounds of my head into live filmic jazz with my musical comrades and cohorts.

I also perform with the King Tut Trio, creating unlikely interpretations of songs with spoken word and electric energy.

You can book me or my bands by emailing tom@tomunwin.co.uk

Trained from an early age in classical music, I’m adept in all styles of jazz through soul into pop music and I’ve performed widely for many years, taking in the Glastonbury and Edinburgh Festivals, theatre productions, big bands and small groups.

A personal highlight for me has been the invitation and opportunity to play twice with the legendary Pee Wee Ellis, the man who practically invented funk as James Brown’s bandleader.

I’ve recorded and written soundtracks for film and TV, including scoring for groundbreaking documentaries on divorce and mental health for RTE Television in Ireland. I’ve worked as an MD and arranger for others.